The iPhone is not a DSLR, mirrorless, or point-and-shoot. It is “the camera you have with you”. 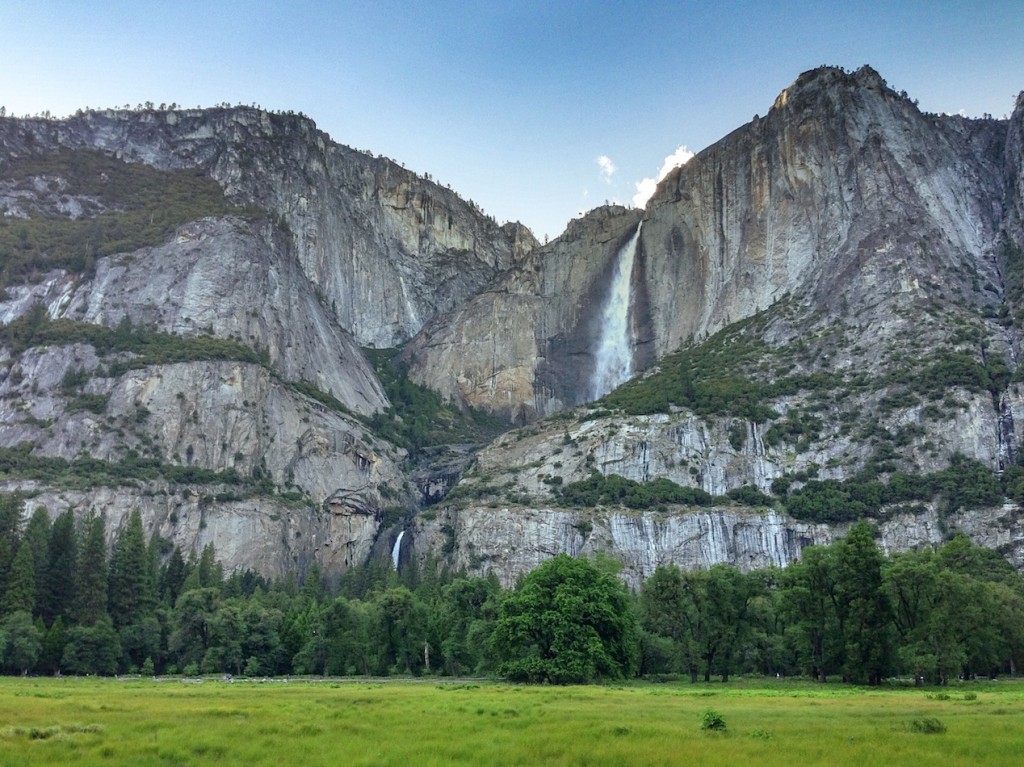 Yosemite Falls at Dusk – taken on iPhone 5 with Pro HDR

HDR (High Dynamic Range, or “tonemapping”) aims to create the appearance of an even distribution of tone differentiation across the visible range. This simulates what the eye does by constantly varying aperture and focus to suit what the eye is looking at. Look into the shadows, the iris (aperture) in the eye opens to suit. Look at something bright, the eye “stops down” or makes its aperture smaller. Thus it has a dynamic exposure compensation. Most cameras take a single picture at a single exposure.

Even the best exposure will have flat or “muddy” shadows, meaning there is not much contrast captured. There will be burned out highlights (bright areas). The midrange areas will have good detail and a natural enough range of tonal differentiation. If only you could get the best of both worlds. Enter tonemapping or HDR. This takes multiple exposures and intelligently blends them so you get the appearance of correct exposure from shadows to highlights.

Typically with a DSLR, shooting in RAW (uncompressed, like a “digital negative”) you will shoot a bracketed set from three to seven images from exactly the same spot (best with tripod), then process them as HDR through Photoshop or an application such as Photomatix Pro (as used in the Nikon image below of sunlit Yosemite Falls, taken from a forest in shadow). There is an art in this. Get it right and it looks natural. Overdo it and it looks surreal, artistic, or fake. It is a matter of preference and taste. But there is a limit before it looks amateurish.

Example of a a DSLR HDR processed through Photomatix Pro 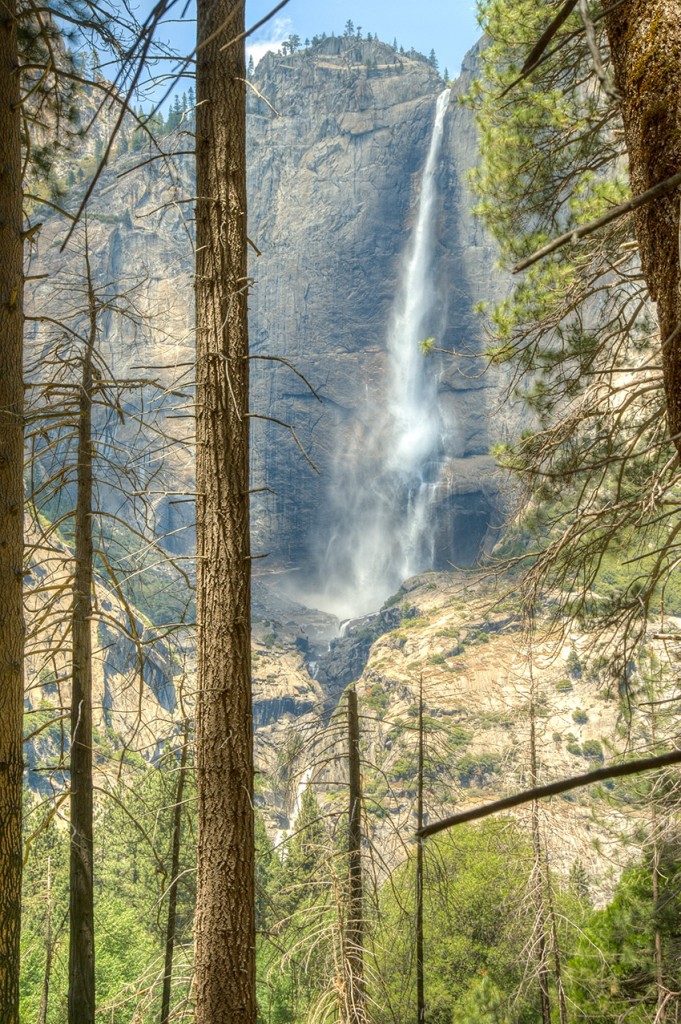 Then there is the iPhone 5, which creates an 8 megapixel image and gives the option for an automatic HDR processing from (I believe) three exposures – one exact, one bright, one dark. Does a pretty decent job most of the time. Sometimes you get a less than perfect result on certain subjects. Good idea to choose the option to “Save Original”, which is the normal exposure unprocessed, along with the HDR version. But you need to hold the iPhone reasonably still, and make sure parts of the subject like branches are not moving.

But my favorite iPhone app for landscape is Pro HDR ($1.99), that does a nice job by taking a light shot and a dark shot, blending them, then presenting you a preview to fine tune. You can use Auto to fine tune after you take it, or Manual to fine tune it before for “difficult” exposures – Brightness; Contrast; Saturation; Warmth; Tint. You also get filters and frames, which I never use. What it does best is rescue high-contrast still scenes or non-moving subjects. You need to hold still while it analyzes, then takes two images.

The wonderful view of Half Dome afforded below from beside the Merced River, was taken with the iPhone. Note how the very bright back face of Half Dome is still showing detail, and the dark shadows of the tree trunk appear well lit. No flash used. Just a little fine tuning in Pro HDR on the iPhone. It was “the camera I had with me”. 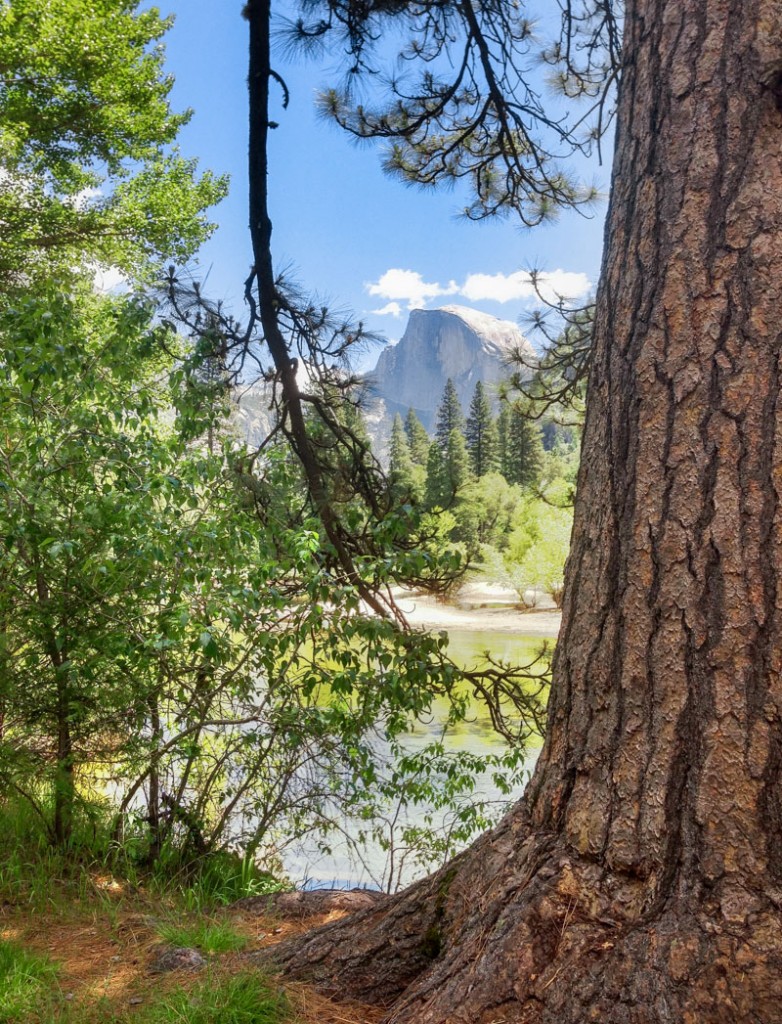 Sunlit Half Dome glimpse across Merced River, past sequoia in shadow. Shot on iPhone 5 with Pro HDR