2
Photographers do not always have the chance to go to exotic locations and visit scenic wonders. But that does not mean we have to miss out on great images, there for the capture out our front (or back) door!. 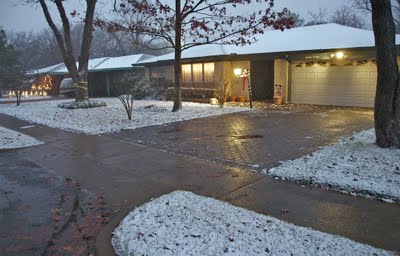 We had traveled to Dallas to spend Christmas with my wife’s family. On Christmas eve, it started to snow, as you see above.

The day prior to this, although late December, there were still some gorgeous fall colors on some trees and on the ground. So, to satisfy my photographic wishes to bring home some attractive images, I went out in the back yard with my camera and looked for some appealing detail subjects. I shot some backlit, colorful leaves glowing against a blue sky. 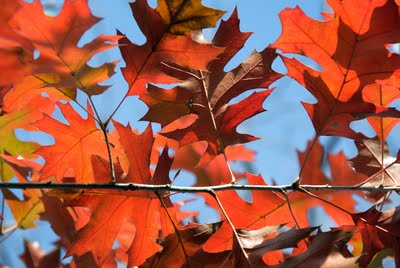 Photo Tip: Backlighting at a slight side angle usually enhances the color saturation and texture of leaves, and makes them appear to glow. Shooting with a large aperture (a low F-stop number on an SLR (or “Portrait” mode on a point-and-shoot) will blur the background and make the edges of the leaves seem sharper. Zooming in lets you get a closer view. The wide aperture means a faster shutter speed, and less chance of shake at a long zoom.

The snow started to fall in the afternoon of Christmas eve, and I captured a dripping bare twig with a suggestion of red fall colors in the background. Again, I used a large aperture to blur the background and set off the twigs so as give the image more depth and dimension. 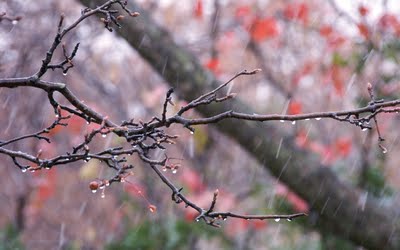 As the temperature dropped and snow continued to fall, water on twigs froze, and snowflakes settled on the ice. The day was closing in and the light was fading, so a large aperture was needed. 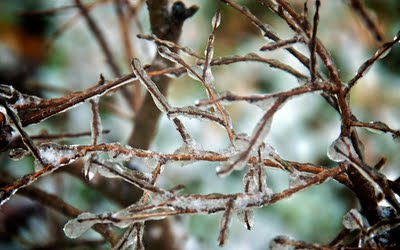 It continued to snow overnight on Christmas eve, and the next morning I was outside early to make the most of the low angle of the sun, and the fresh snow before it began to melt.

Photo Tip: For this street shot, I used a small aperture and wide angle, to have the roadside snow as well as the trees in sharp focus (aka “depth of field”). I got down low for a more interesting angle, and to emphasize the snow. Since this was a difficult exposure, I did a bracket shoot, and later chose the best image from the range of five exposures.

As I studied the scene, I snapped off a range of subjects. But what really interested and appealed to me was the simplicity of the backlighting and long shadow from a single leaf, and how by getting close to it, I was able to capture the glistening snow texture. 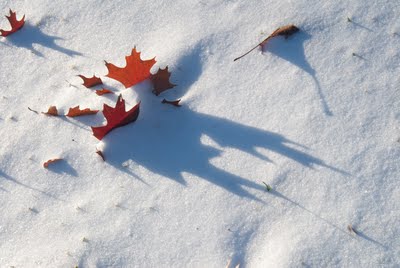 Photo Tip: For this type of contrasty subject, especially with snow, I did a five-shot bracket at F14 (to ensure sharpness from front to back) with one EV difference between. And to cut down on glare from the snow (especially since I wanted to highlight the snow as well as the details of the darker leaf, I used a circular polarizing filter. In general, when photographing a subject like this one in snow, you need to open the exposure up around one F-stop, or one unit of EV+.

For working on images like these, I use a non-destructive editing program such Apple’s Aperture, or Adobe Photoshop Lightroom (I use both, since they each have different strengths). In this case, I used Aperture because I like the way I can organize and compare images. One feature of Aperture is the “Shadows and Highlights” adjustment, that seems to work well for images with snow.

Click on any image for a larger version, then try clicking on that larger image for a full size view. You are welcome to download and use as a screen saver for personal use, but please do not use or publish with permission.

Hope you enjoy this post of my snowy image, and the photo tips.